Black History Month is an annual celebration of achievements by African Americans and a time for recognizing their role in U.S. history.

Here are some important aviation figures who have a Virginia connection. 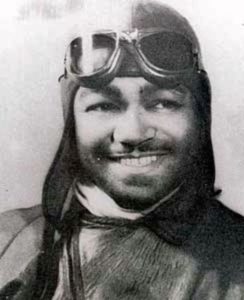 Chauncey Spencer was born in Lynchburg, Virginia in 1906. He saw an airplane in flight at age 11 but, after finishing college, was unable find someone who would give him flight instruction in Lynchburg.  He moved to Chicago to take lessons and, in 1934, he joined with other African American pilots in establishing the National Airmen Association of America (NAAA).  He and fellow NAAA member Dale Lawrence flew a rented Lincoln-Page biplane on a ten-city tour beginning in Chicago and ending in Washington, D.C.   The flight prompted a lot of coverage by the black press and contributed to a decision by Congress to include blacks in the pre-World War II Civilian Pilot Training Program.

Mr Spencer was inducted into the Virginia Aviation Hall of Fame in 1983. 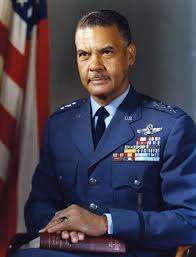 Benjamin O. Davis, Jr. was born in Washington, D. C. in 1912.  He entered the U. S. Military Academy at West Point, New York in July 1932.  After a year as commander of an infantry company, he assumed duties as professor of military science at Tuskegee Institute, Tuskegee, Alabama.  In May 1941 he entered Advanced Flying School at nearby Tuskegee Army Air Base and received his pilot wings in March 1942.

He continued to advance in his military career after World War II and retired as a general on February 1, 1970.

General Benjamin O. Davis, Jr. was inducted into the Virginia Aviation Hall of Fame in 1993. 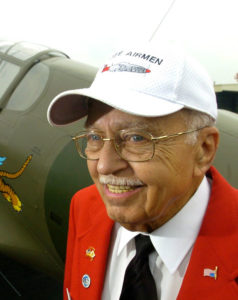 Howard Baugh was raised in Petersburg, Virginia.  In March of 1942 he became an Aviation Cadet at the Tuskegee Army Airfield, Tuskegee, Alabama and graduated in November of 1942.  He joined the Army Air Corps 99th Fighter Squadron which flew out of Sicily and Italy.  He flew 135 combat missions in P-40 and P-51 aircraft.

Upon his return, he was a pilot instructor at Tuskegee Army Airfield.  Afterwards he became a Professor of Aerospace Studies, Air Force ROTC, at Howard University in Washington, D.C. where he established the first AFROTC at a historically black college.  He held the same position at Tennessee University in Nashville, Tennessee.  He was promoted to Chief of the Systems Planning Division Headquarters at Chanute Air Force Base, Illinois.

Lt. Col. Baugh retired from the Air Force in 1967 and was inducted into the Virginia Aviation Hall of Fame in 2006. 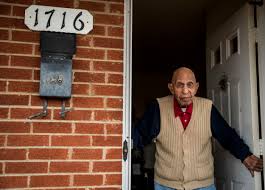 Alfred Thomas Farrar left Lynchburg, Virginia in 1941 to be trained as a pilot at the Tuskegee Institute in Tuskegee, Alabama.  While he trained as a pilot, he didn’t fly any combat missions overseas during his time in the U.S. Army Air Corps but remained stateside until being discharged in 1943.

After serving in World War II, he studied aerospace engineering and worked as an engineer, primarily focusing on aircraft engines, for the Federal Aviation Administration for four decades. 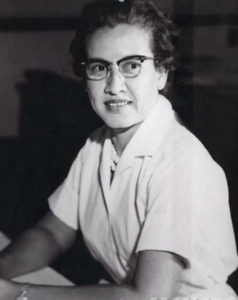 Katherine Coleman Goble Johnson was born in White Sulphur Springs, West Virginia in 1918.  She graduated with highest honors from the math curriculum at West Virginia State College in 1937 when she was 18.  Upon graduation she took a job teaching at a black public school in Virginia.

In 1953 she began temporary work in the all-black West Area Computing section at the National Advisory Committee for Aeronautics’ (NACA’s) Langley laboratory in Hampton, Virginia, headed by fellow West Virginian Dorothy Vaughan. Her position soon became permanent and she spent four years analyzing data from flight tests and worked on the investigation of a plane crash cause by wake turbulence.

In 1957 she provided some of the math for the 1958 document Notes on Space Technology. She did trajectory analysis for Alan Shepherd’s May 1961 mission Freedom 7. In addition, she coauthored Determination of Azimuth Angle at Burnout for Placing a Satellite over a Selected Earth Position which was the first time a woman in the Flight Research Division (of NASA) had received credit as an author of a research report.

In 1962 she was asked to check the computer generated orbital equations for John Glenn’s Friendship 7 mission.  She also worked on the Apollo and Space Shuttle missions as well as the Earth Resources Technology Satellite (ERTS) (later renamed Landsat) and authored or coauthored 26 research reports.

She retired from NASA in 1986. In 2015 she was awarded the Presidential Medal of Freedom, America’s highest civilian honor, and in 2017 she was inducted into the Virginia Aviation Hall of Fame. 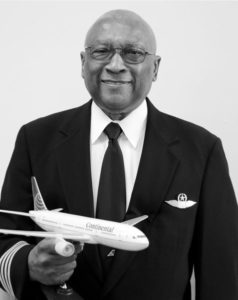 Upon retiring from the Army as a colonel in 1983, he went to work for People’s Express Airlines, later acquired by Continental Airlines. While working as a pilot, he was asked to assist in the recruitment of minority and women pilots and was very successful in this role.  Upon his retirement from Continental in 2002, it was noted that he had trained over 1000 pilots and mentored roughly 200 African Americans with 25 flying for the airlines.

Captain Bailey was inducted into the Virginia Aviation Hall of Fame in 2016. 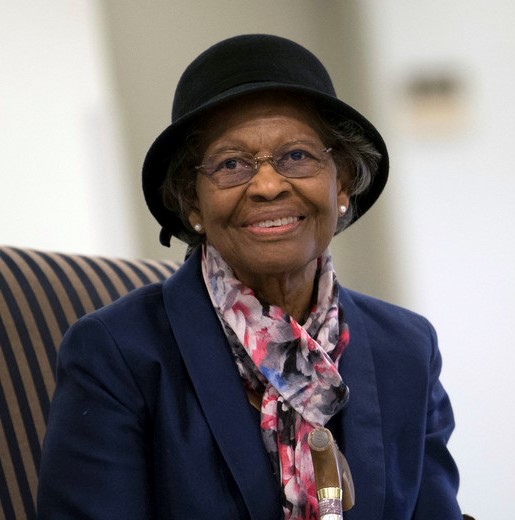 Gladys West was born in 1930 in Dinwiddie County. She majored in mathematics at Virginia State University. In 1956 she was hired as a mathematician at the Naval Proving Grounds in Dahlgren, Virginia (now the Naval Surface Warfare Center) where she analyzed satellite data.  At this time she was one of only four African Americans employees working there.

She started as a human computer, doing the math manually but then transitioned to programming computers.  In the 1960s she worked on an astronomical study that proved the regularity of Pluto’s motion relative to Neptune.  Then she became project manager of the Seasat radar altimetry project.  She used information from Seasat and other satellites to refine an increasingly detailed and accurate mathematical model of the actual shape of the Earth.  This modeling would prove essential to modern GPS, since it relies on this model to determine the position of a receiver.

Dr. Gladys West retired in 1998 after 42 years at Dahlgren and then pursued a remote PhD program in Public Administration at Virginia Tech which she completed in 2018. 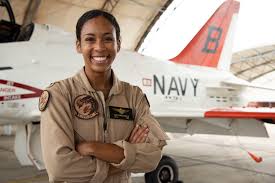 She completed carrier qualifications and advanced to graduate-level flight training.  She’ll be an EA-18G Growler pilot with training in electronic warfare tactics, techniques and procedures in preparation for her assignment to the fleet.