Culpeper Regional Airport had tons of cloud coverage and grey skies on Saturday, October 9, but the ceiling was high enough to allow aircraft to fly and put on an amazing air show.

Despite the grey sky, the event was well attended and people were able to view numerous static displays and talk to aviation professionals. There was a remote controlled air show in the morning followed by a spectacular air show that included the Flying Circus, Chef Pitts, Scott Francis, and Art Nalls. Manfred Radius took to the sky in his glider and showed off his aerobatic skills by gracefully navigating the aircraft to music. There was a massive warbird flyover at the end of the air show and it was a breath taking site to see.

DOAV PR and Education Coordinator Kim Wells partnered with private pilot Andrew Crider to help educate the crowd about aviation. Crider’s aircraft is hangared at Culpeper Airport and he put it on display to allow youth to sit inside and learn about aviation while getting a feel for what it’s like sitting in front of the flight controls.

“Andrew is a huge supporter of aviation education and it was so nice of him to offer his time and aircraft to help DOAV at this event. He really knows how to get the crowd excited about aviation and it’s fun to watch the kids faces light up when they are in the airplane. I look forward to working with him again on future projects,” said Wells.

In addition to letting youth inside the aircraft, Crider handed out calendars and scholarships while Wells talked to the crowd and took photos.

Overall it was a very fun day filled with aviation education and an air show! 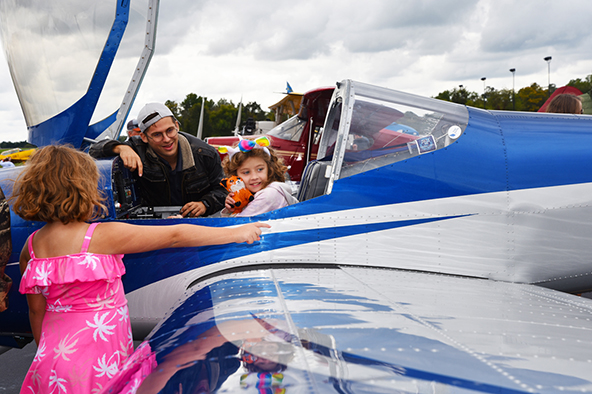