Past Virginia Airport Roles and Why They Might Change

DOAV established its current airport roles in 1990. They have served their purpose well for the past 20 years, but DOAV wants to take a step back and determine if it is time for change.

The 2016 VATSP assigned airports to one of five roles. Those roles were:

These roles were used to describe the function of airports as they relate to its role in the state system. Further, the roles help to determine the appropriate airport facility requirements. For example, Reliever Airports should have an instrument approach with vertical guidance, while General Aviation Regional Airports should have any type of instrument approach. Airports in those roles that did not have these types of approaches were recommended to obtain these improvements.

These roles were also used to evaluate how well different segments of the aviation system provided coverage of Virginia, using drive-time market areas.

Here is the recommended Virginia Aviation System from the 2016 update (see below):

DOAV is interested in looking at these roles to determine if their use is still appropriate. The consultant team will work with the DOAV to determine what purpose airport roles can serve, including a look at updating facility requirements, if a different role categorization is needed, and if the airport roles can serve additional purposes, such as helping prioritize funding decisions.

Stay tuned for more updates as DOAV refines how it makes use of airport roles in the 2022 VATSP. 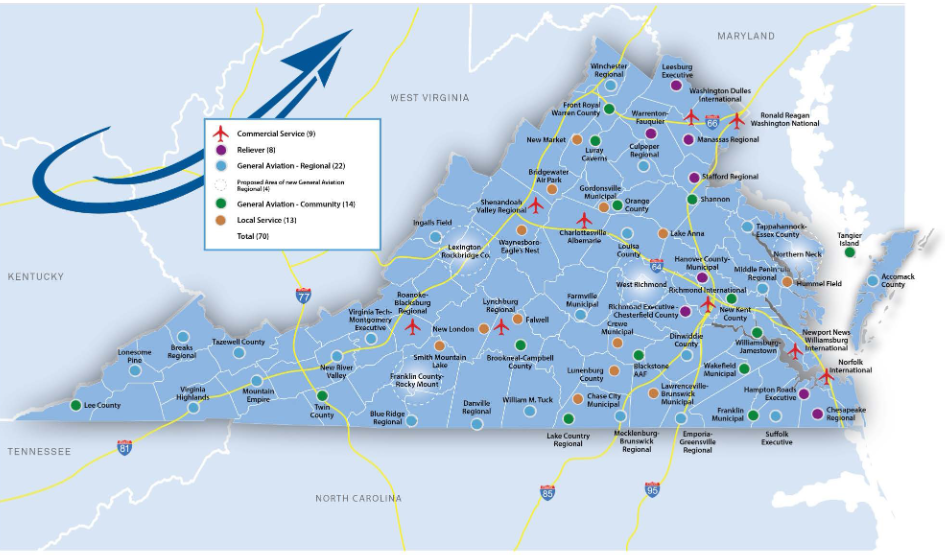