Wright Brothers Day takes place each year and  commemorates the first successful flight in a heavier than air, mechanically propelled airplane which took place on December 17, 2003 near Kitty Hawk, North Carolina.  The Wright Flyer was designed and built by Wilbur and Orville Wright, of Dayton, Ohio, who owned a bicycle shop.  Orville Wright was at the controls for the first successful flight which lasted 12 seconds and covered approximately 120 feet.  Three more successful flights took place on December 17 with the last and longest flight covering 852 ft.  While it was on the ground, a gust of wind flipped the historic aircraft over and damaged it beyond repair.

The Virginian-Pilot was the first and only newspaper to report on the first, powered, controlled flight with an article that was published on December 18th.

The Wright brothers continued to improve their design and built and flew new flyers for many years to come. 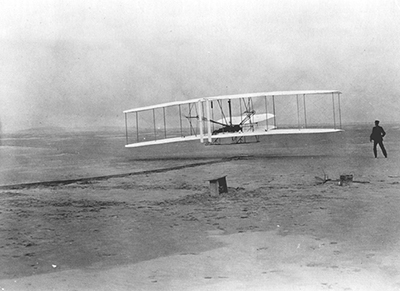