Qantas Draws a Kangaroo as a Farewell Message 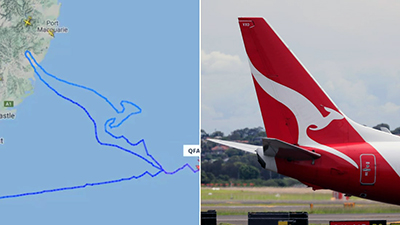 Qantas’s last Boeing 747 airplane left a farewell message in the sky as it flew from Australia for the final time. The “Queen of the Skies” departed from Sydney Airport and was commanded by Capt. Sharelle Quinn, the airline's first female captain.  The flight path of Flight QF7474 traced the company’s iconic kangaroo logo in the sky before setting off across the sea.

People gathered at Sydney Airport to bid farewell to the plane, which received a water salute before departure. The plane was loaded with cargo bound for Los Angeles before the aircraft goes into storage at a boneyard in the Mojave Desert, according to the Qantas press release.

"This aircraft was well ahead of its time and extremely capable," said Qantas Group CEO Alan Joyce in a statement. "Engineers and cabin crew loved working on them and pilots loved flying them. So did passengers. They have carved out a very special place in aviation history and I know they'll be greatly missed by a lot of people, including me."

The 747 is being replaced by more fuel-efficient aircraft with better range, like the 787 Dreamliner and the Airbus A350, according to Joyce. While the fleet was set to be retired this year, Qantas said the pandemic impacted travel globally, which moved up the retirement by six months.